Slowly getting the hang of my new camera, a ZWO ASI 224mc. Much improved over the older Altair 130mc, higher frame rate and sensitivity. This means that lower gain can be used which results in less noise and the higher frame rate means points of good seeing can be captured more often. Still a way to go and it would help if Jupiter (and friends later in the year) weren't hugging the horizon. 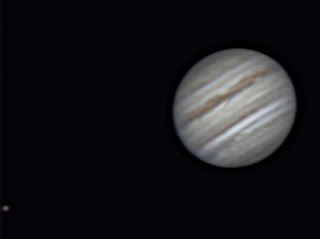 Taken with an 8" Celestron Evolution, ZWO adtmospheric dispersion corrector, Revelation x2.5 barlow (telescope thus at F25), ASI224mc. Captured 13000 frames in 2 minutes in sharpcap pro, stacked in Autostakkert 2, 60% then processed in sharpcap. The moon to the lower left is Europa.
Posted by EEAC at 01:10